Veronica shook her head and set down her fork on our makeshift “Christmas Dinner” table, aka a glass table that resembled a tongue on the floor of Nadea’s apartment.

I got a sinking feeling in my gut, because Veronica always knew what she was talking about. She was exceptionally good at researching things, and had enlightened me on matters such as pensions (we apparently receive those in Korea, and I would have left about 4k on the table if she hadn’t told me to sort it out), the fact that there are lawyers who don’t have to appear in court (cue 10 hours of researching a potential new career), and most importantly, the glory that is Stranger Things. Basically, if she said the air was poison, then the air was literal poison.

“It’s really bad,” she said. “Some of it’s from China, but they also burn coal here.”

Veronica shrugged. “It can cause cancer,” she said, taking another swig of grapefruit soju.

This is one of many things I should have known before coming to Korea.

In my defense, air pollution here has only become a problem in recent years, so you don’t hear about it as much as, say, China.

But these days, it’s a way of life.

When I ask my students “How’s the weather today?” and throw them a ball so they can take turns answering, one of my students inevitably says: “It’s dusty!” (referring to the Yellow Dust blown over from China)

(The first time they said this, my Korean co-teacher said: “Is that right? Can we say ‘It’s dusty’?”

“But how do you say it in America?”

This impacts me in a few ways:

2. I can’t prove this, but I suspect the pollution has ruined my skin. I’m not a scientist, but all I can say is I had clear skin before I came to Korea, changed nothing about my skincare routine, and suddenly I’m a pizza-faced teenager again. Thanks, Korea.

3. I also can’t prove that this is because of the air, but I get frequent head colds. At any given point in time, regardless of how healthy I feel, I can usually bend over and cough until I hack up some yellow snot that was hanging out in my throat.

You can buy air filter masks here, but they’re $1-2 each, and are supposed to be replaced every day, which gets expensive quickly. I’m guilty of using the same mask a few days in a row.

Here are a few other things I (perhaps foolishly) did not know about Korea before I came here. Don’t worry, not all of them are bad.

Online shopping will make you want to gouge your eyes out

When buying anything online in Korea, you have two options:

First, you can use Gmarket, which is like a watered-down version of Amazon where you have to try 5 different ways of phrasing a product name before you find it.

For example: One time, I wanted those iron-on denim patches that you can stick to the insides of your jeans when they wear out.

A search for “iron on jeans patch” yields 0 results. “jeans patch” yields 10 pages of results filled with jeans (not patches), as does “denim patch.” A search for “clothes patch” shows me nipple covers. Other failed searches include: “fabric patch,” “clothes hole repair,” “patch,” “patches,” “there’s a hole in my clothes just fucking help me please.” 20 minutes later, after searching “sewing patch,” I found what I was looking for. The denim patches had been (helpfully) titled: “PANTS/ATTACHMENT.”

TL;DR: Gmarket is not optimized for English searches, despite being an English site.

The alternative is to buy directly from a retailer’s website, which usually requires you to install an app on your phone. You then have to navigate pages and pages of Korean text, enter one of your 3 bank passwords (it’s unclear which one), list your phone number for text-message and then phone call verification, enter your foreigner identification number (Korean equivalent of SSI), and then all your card information. Except the whole thing fails because your name is listed as BAKER KYLIE ANN on your foreigner ID card and KYLIE ANN BAKER on your debit card. Other times, you’ll get through the whole process only to find that the transaction cancels itself because you can only purchase things through INTERNET EXPLORER, which you can’t get on a mac. Because apparently this is the year 2000.

Health care here is cheaper than the U.S. but not necessarily more effective or convenient

People go to the hospital here for everything because it’s fast and cheap. Most doctors speak enough English to help you, but the reception staff speaks almost none, so it’s helpful if you can say things like “my throat hurts” in Korean, at the very least.

Then they give you drugs in these condom-esque packages without really explaining to you what they are, though that might have been my experience just because I’m foreign and they didn’t want to bother.

I went to the hospital once because I thought I had strep, but was told it was just a cold and given the drugs above. After google-translating, I found that I’d been given extra-strength tylenol, a decongestant, and some other drug for an upset stomach (which I didn’t have). None of these things were relevant to my inflamed throat and near-inability to speak.

I also travel halfway across Seoul to see an English-speaking dermatologist for my psoriasis prescription. Despite my prescription being a hell of a lot cheaper in Korea ($5 vs $60 per month), there’s no such thing as a refill here. You have to physically go back to the doctor’s office so he can write another prescription without even examining you. Because of this, I find myself trying to make my medicine last as long as possible, just like in the states. Except this time it’s not the cost, but the fact that I hate traveling an hour each way for a two-minute appointment.

I severely underestimated the coolness of this fact before coming here. There are cafes for every animal you can think of (cats, dogs, sheep, even raccoons). 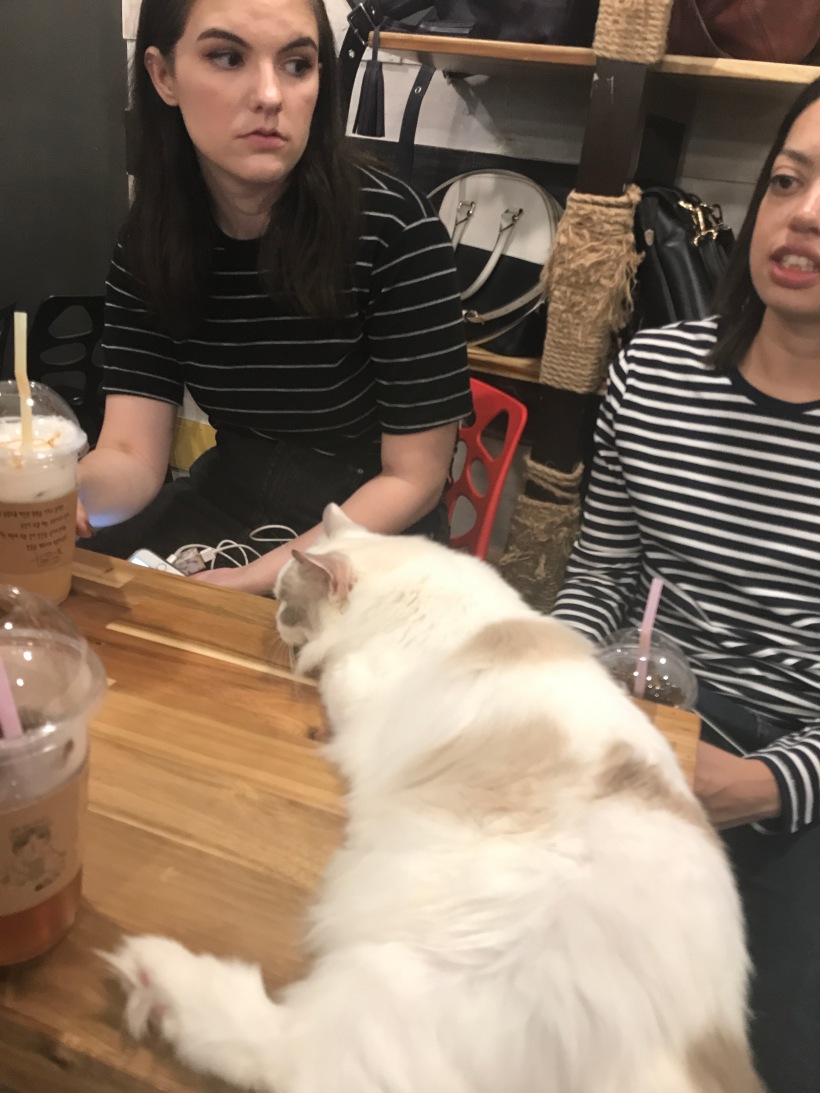 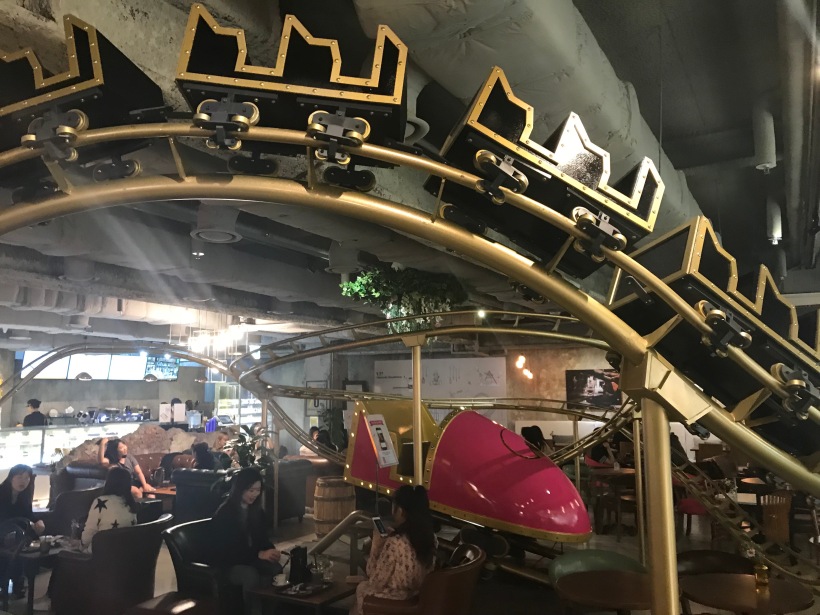 There’s even one with lofts, Christmas lights, and a huge VW van (that you can sit inside of). Not to mention the best hot chocolate I’ve ever had. 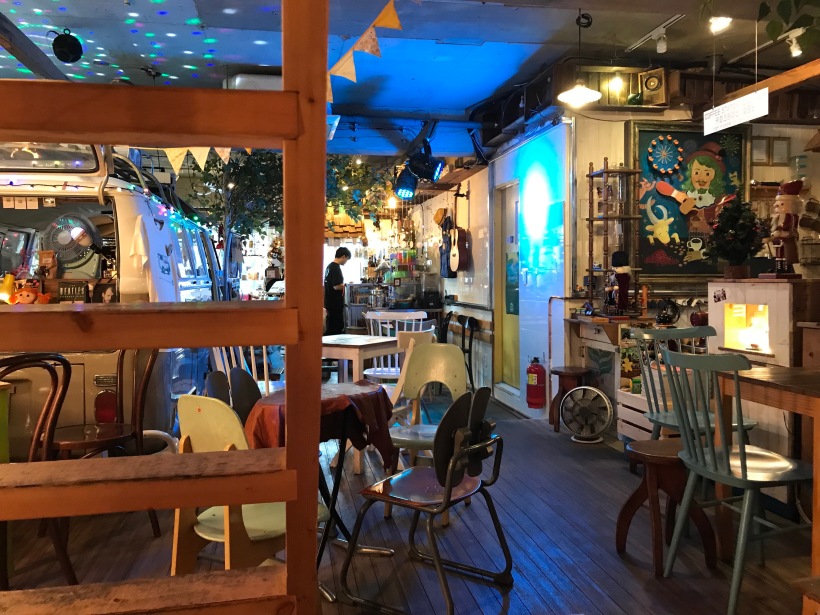 And unlike Spain, no one kicks you out if you want to do homework in cafes.

This is something I probably could have figured out with a quick google search prior to coming to Korea, but even so, I didn’t fully understand just HOW MANY cafes there are here. It’s not like Atlanta, where you need to know exactly where you’re going before you drive there. In Seoul, you can just walk around and discover 10 amazing places to sit and drink coffee on the same block.

As soon as I knew where I’d be living in Korea, I found my address on Google Maps and went right to street view. The first thing I saw was a stream lined with trees that I knew would look gorgeous when they blossomed in the spring. Words can’t describe how excited I was. One of my favorite Kpop songs is even about cherry blossoms.

Then they finally bloomed and they were gorgeous, albeit whiter than I expected. 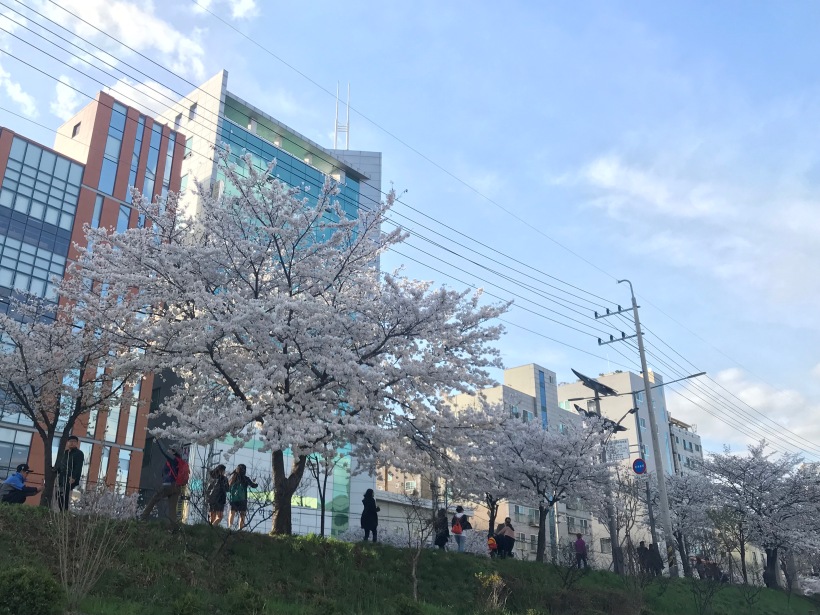 And one week later, they were gone.

It’s not like I’ve never seen cherry blossoms before, but somehow I thought they’d last longer in Asia. I mean, that’s where they’re from, isn’t it? Everyone associates East Asia with gorgeous cherry blossoms, right? Surely such a pervasive “Asian” image couldn’t come from something that vanishes so quickly? (It can)

On a related note, my co-teachers told me that if you catch a falling petal, it means you’ll find your first love. I, unsurprisingly, did not catch one.

I do not know a single foreigner who hasn’t fallen in love with one of the characters/stuffed animals here. The Kakao brand has a character named Ryan (a male lion without a mane) and my obsession with him has gotten way out of hand. 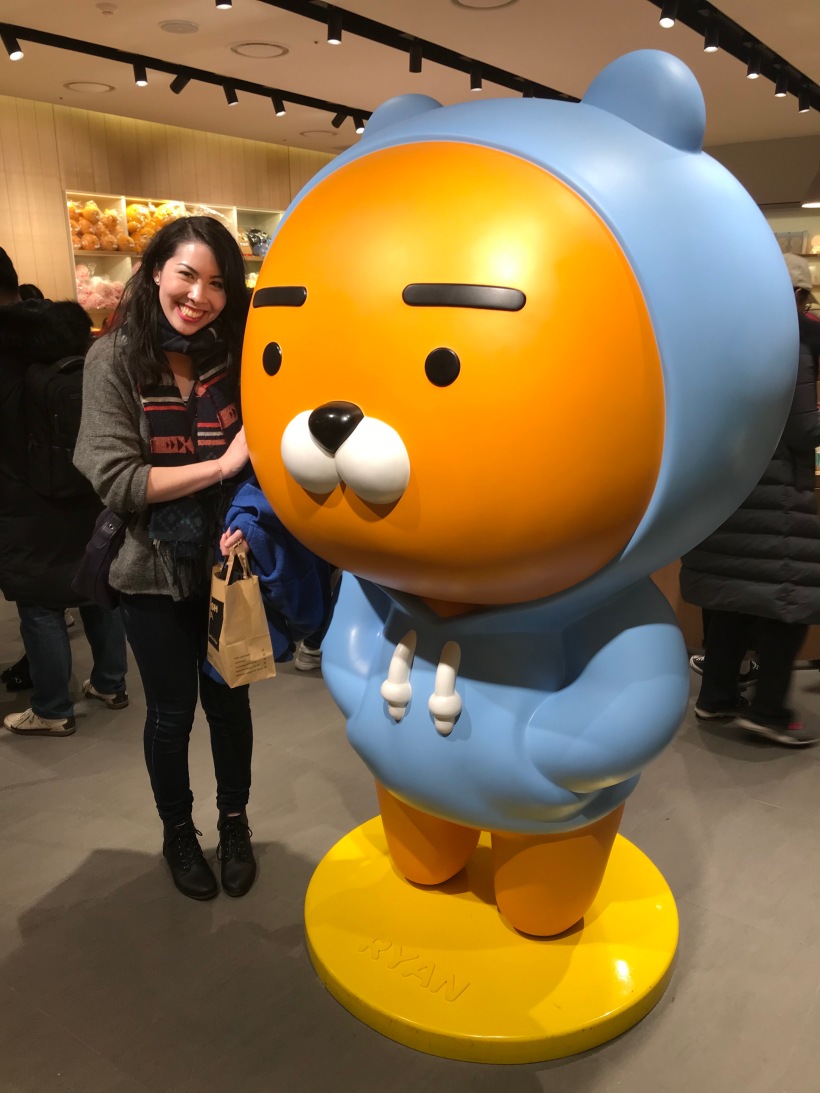 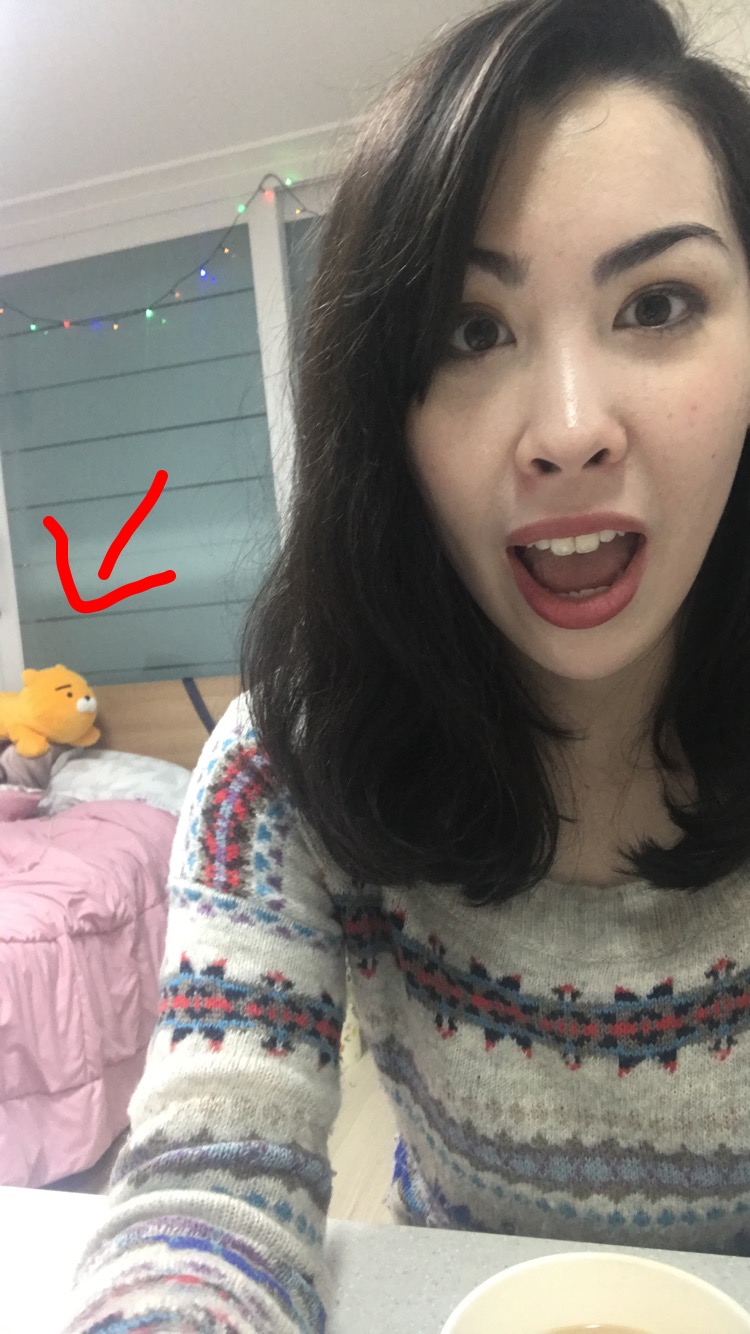 I challenge you not to fall in love. Seriously, I know grown men who are obsessed with Ryan. You can find his face on pretty much any product here (tissues, lip balm, mirrors, underwear, golf clubs). It’s a challenge not to buy everything. Talk about effective marketing. I feel like Kakao infiltrated my brain.

Korea, like any country, is neither fully good nor bad.

I can’t stand the foreigners who come here and rant about how much BETTER Korea is than the West, or the people who complain relentlessly about it. There are a lot of legitimate things to both love and criticize.

One positive that’s come out of my life here is that, on days when the air is clean and the sky is blue, I always go outside to enjoy it. I’d never realized before I came here how spoiled I was by the always-blue Georgia skies. These days, I never ever take blue skies for granted. 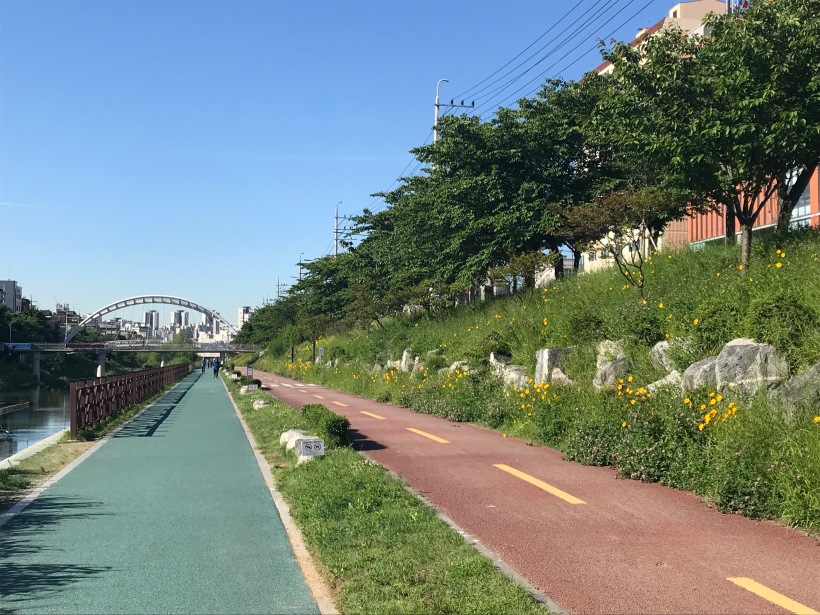