I spend a lot of my lesson-planning time laughing at the English textbook that I’m required to teach from. On more than one occasion, I’ve had to explain to my students that the textbook is wrong, so please ignore every single picture and video that teaches you this very incorrect English.

I’m not sharing this to make fun of Korean people’s attempts at speaking English (God knows I could never make a Korean textbook). English is an incredibly hard language and even trying to learn it is admirable.

Publishing an English textbook without having a native English speaker give it a quick read-through is doing a huge disservice to Korean students. There are so many mistakes that could have been avoided by paying literally any native speaker, educated or not, to quickly read and approve each chapter. It’s clear that the publishers didn’t take the time to do this, and as a result there are tons of mistakes, awkward phrasing, and just plain weird choices in topics (ie things that English speakers rarely ever have to say). As cool as it is to hire native English teachers like me, improving the textbooks would probably help students a lot more.

(Not all of these pictures are examples of irresponsibly bad English. Some of them are just funny)

Okay, without further ado, let’s take a look at Chapter 1 of the 6th grade textbook. This chapter is called “What Grade are you in?”

Ignoring, for the moment, the fact that nobody would say “the” here, WHAT IS WRONG WITH THIS KID’S HEAD?

Okay forget that. Let’s go to the library with Jason. The librarian says “Can I help you?” and Jason says:

That’s not the right verb, but okay. 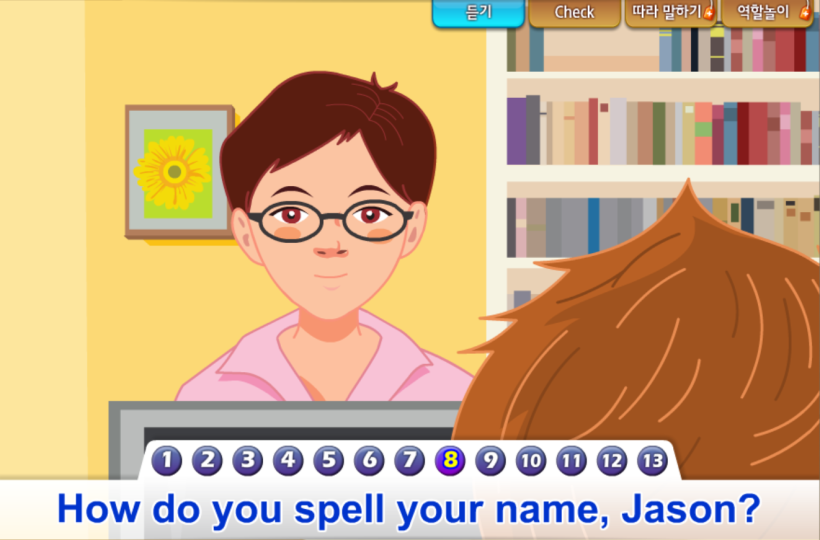 But Jason gets his library card (he makes a peace sign in the photo that the librarian takes for his ID, which is definitely something white people do) and moves on with his life. But, because this book likes to keep you on your toes, in the next chapter, Jason goes to the nurse with a headache. 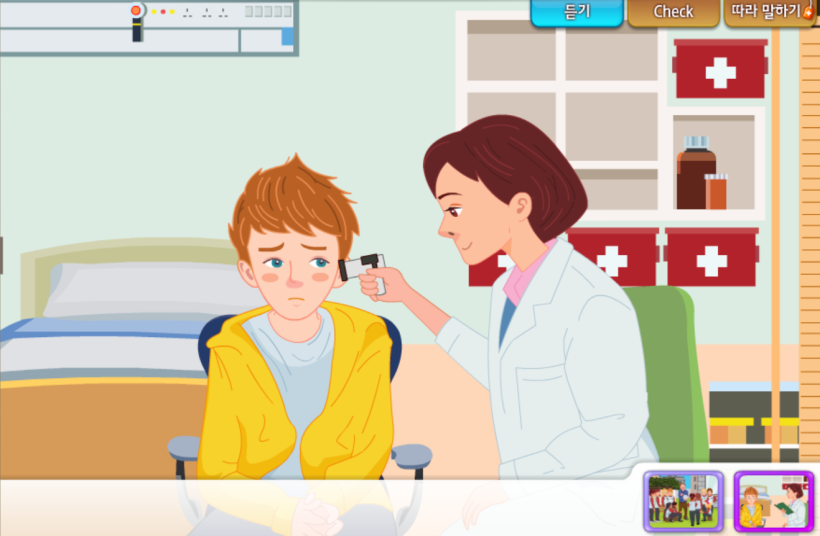 She takes his temperature with this ray gun, which she taps against his eye for 0.5 seconds, before announcing that he has a fever.

Then she offers him a single, mysterious pill in her bare hand.

But fear not, Jason recovers and tries to woo Sora, his lady-friend, by picking up a frog in the park and showing it to her:

Sora takes the frog while their creepy friends watch from the bottom left corner. 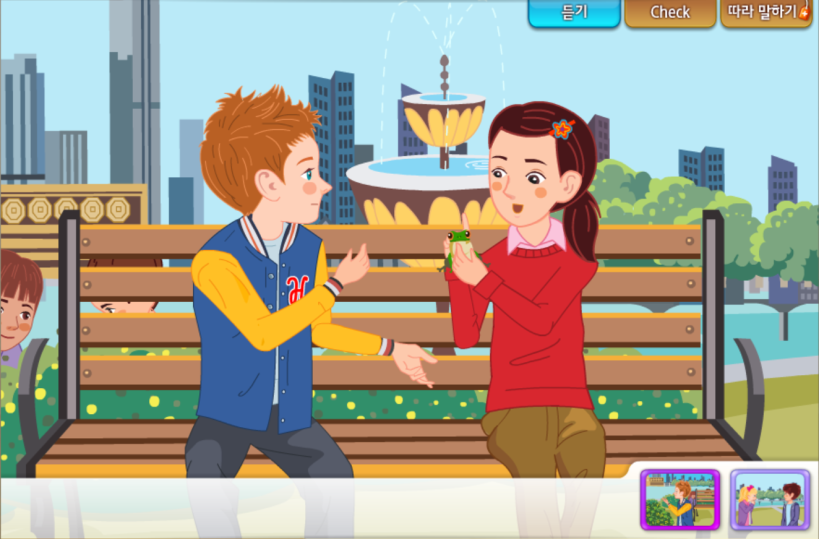 Then the frog jumps out of Sora’s hand and they make this facial expression: 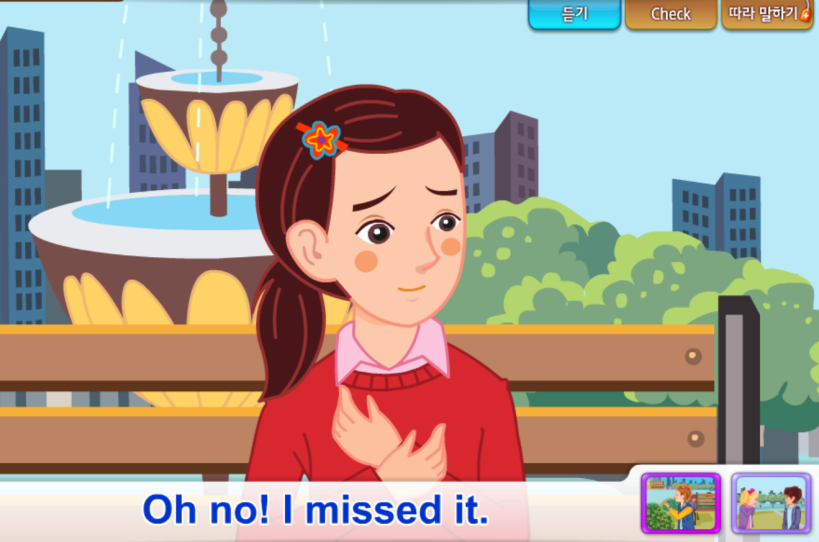 (More importantly, how did this mistake make it into a published book?)

Jason should probably be worried, because Sora has an internet friend from America:

I actually had to look this word up. Apparently, it’s a gathering of scouts. Upon realizing this, I remembered going to jamborees when I was a girl scout. Except, there aren’t coed scouting groups in America as far as I know. So… how did Sora meet a boy at a girl scout event?

As an American, I can testify that this drawing is an accurate representation of how American people dress. We also greet each other with “Hello, friends!” so A+ English here.

In the same chapter, the authors take a stab at teaching Korean kids about nicknames in English:

I think they missed the mark a little. 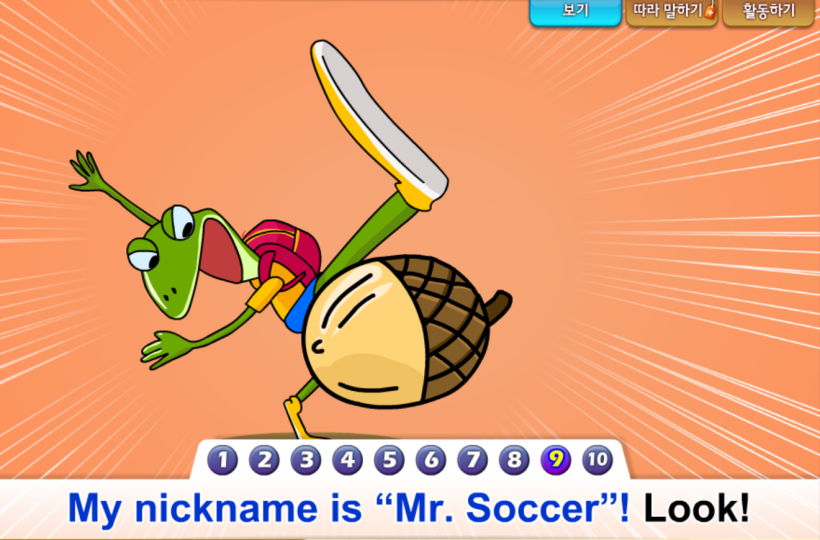 This is still not how nicknames work. Also not how nicknames work, but I’m starting to see a pattern here.

A few chapters later, these two kids show up next to a river, apparently with no plans.

But this is a girl who knows what she wants in life: 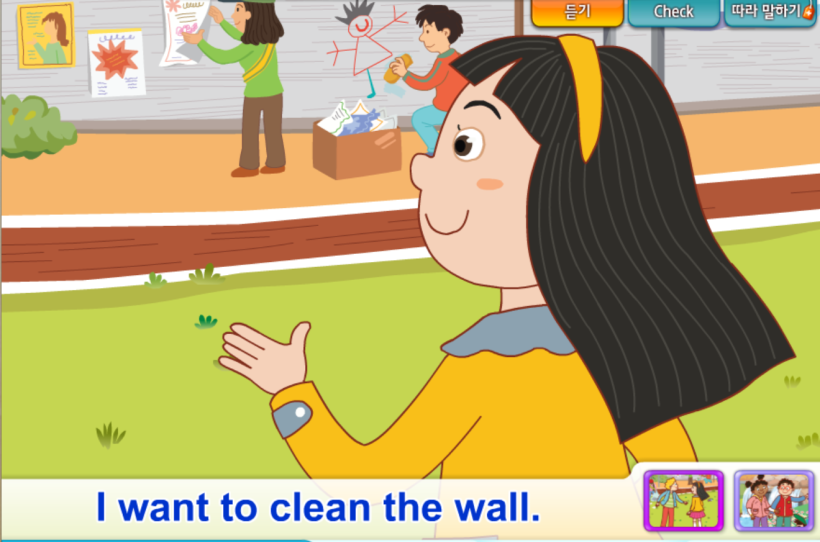 …This is an odd thing for a child to say. 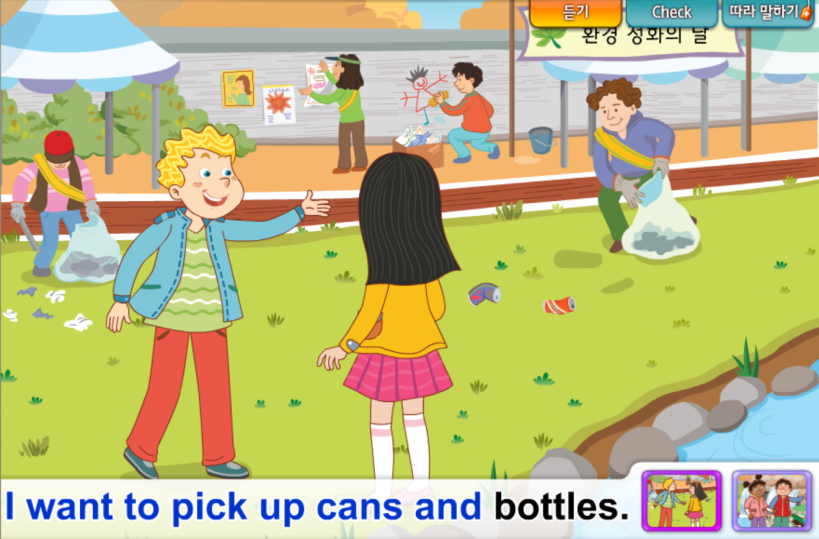 Does anyone actually want to do this? These writers are awfully idealistic.

The other vocabulary for this chapter includes: 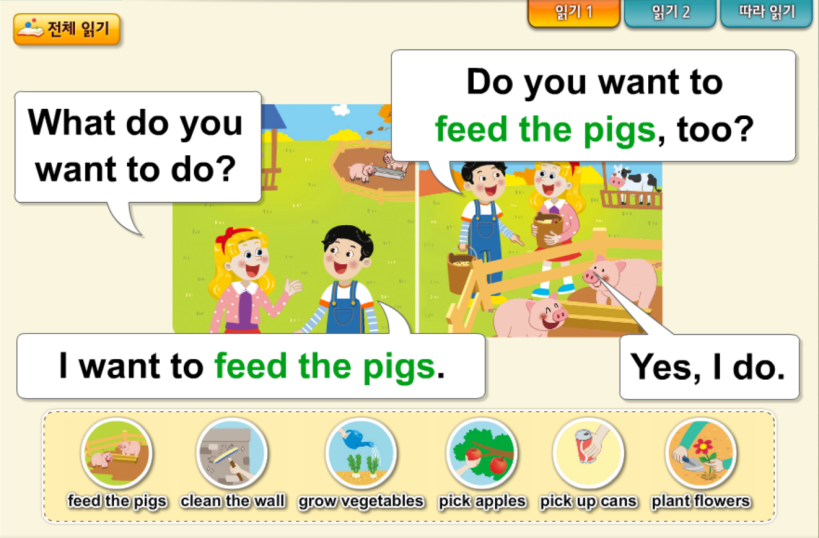 I cannot think of a time in my life when someone has asked me if I wanted to feed the pigs. I am beginning to suspect that this book is meant for kids living in rural Korea because this vocabulary is not particularly helpful for kids in Seoul.

But it’s okay! In later chapters, the kids learn more relevant things, like furniture and rooms:

… There’s really nothing I can say about this one.

Let’s move onto some rapid-fire slides that I like to call “This is not how this phrase works in English.” Exhibit A:

Who even says “What a surprise!” anymore, and if they do, this certainly isn’t the way to use it.

“Not at all” comes after someone says “Thank you,” not “I’m sorry.” No points for research here.

The book, for some reason, randomly and aggressively asserts that you have to say “COME home” and not “GO home,” even when talking to people who don’t live in your house. This is especially confusing to me considering that “go” and “come” verbs work the same in Korean as they do in English.

Let’s take a break from raging about poor English research and visit our friend Ming, who is coming home from school:

Nice of you to ask, Ming.

It’s worth noting that in a previous chapter, when Ming tells her dad she has a cold, he simply responds: “That’s too bad” and the scene ends.

But, even if the book has stereotypes, at least it has inspirational cartoons: 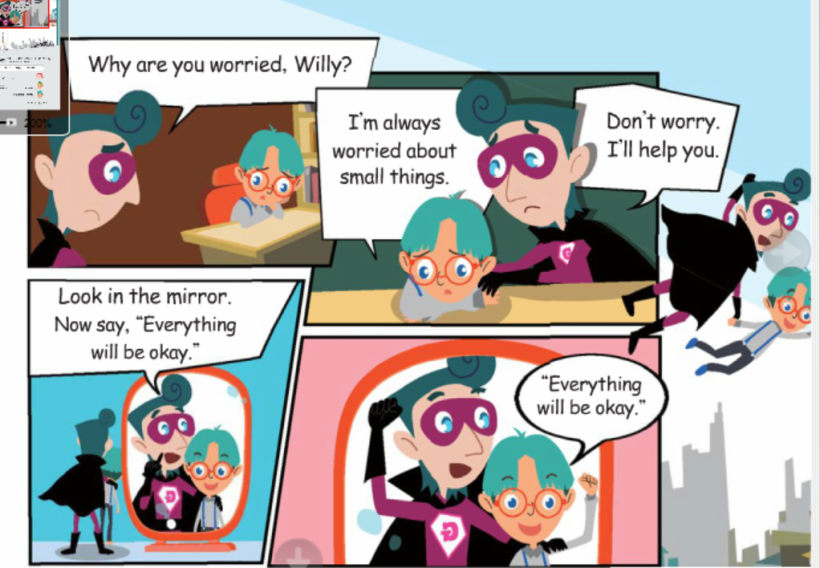 I never knew it was that easy!!!

Let’s not forget about Sora. Without Jason’s knowledge, she’s met up with Eddie after class:

Do you mean like a school dance? Are you trying to ask Sora out?

Apparently he is, because he then tries to woo Sora by “showing her some moves”: 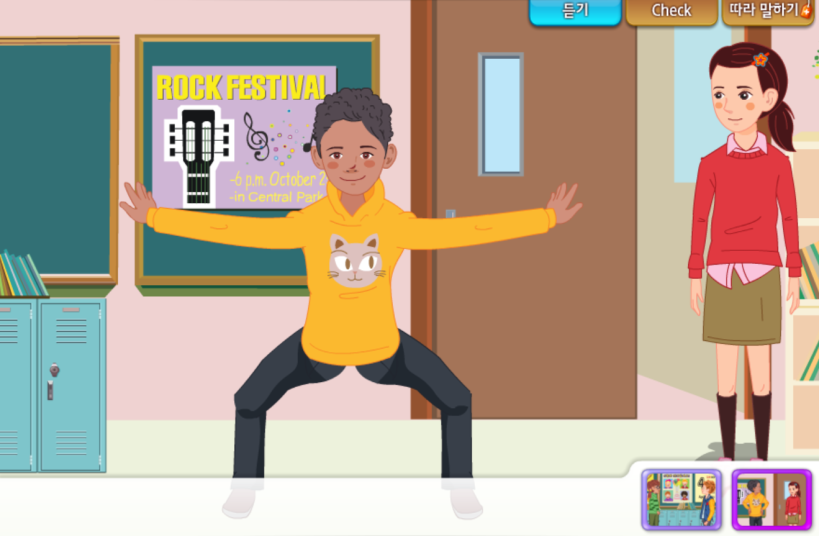 He apparently splits his butt in half while doing so.

7 thoughts on “English Textbooks in Korea are Hilarious”